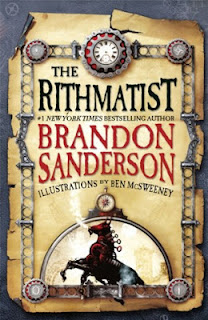 One of the things I love about reading books is their ability to completely capture your imagination and whisk you away to another world without having to leave the comfort of your own bed. Seriously, it's like a movie, plane ride and simulator all in your hands! And when you have a particularly amazing book, it's like all of that amped up by a thousand times. I fell in love with Brandon Sanderson's writing after reading "The Final Empire", the first book of the "Mistborn Trilogy", and was thrilled when I found out that his first YA fantasy novel was being released last week! Being the desperate book gobbler I am, I decided that I just had to get my grubby hands on a copy of "The Rithmatist", and so I have!

Joel has pored over every book on Rithmatics, memorized every defense tactic possible, and can name the top Rithmatists from the top of his head. The only problem is, Joel isn't a Rithmatist. Chosen by the Master in a mysterious inception ceremony, Rithmatists have the power to infuse life into drawings called Chalkings, and have been the main defense against the Wild Chalkings that leave destruction and death in their wake. As the son of a lowly chalkmaker at the prestigious Armedius Academy, Joel can only slip into Rithmatic lectures and dream of chalk. But when students begin to disappear, kidnapped and leaving only blood splatters behind, Joel and his friend Melody find themselves swept up in an adventure of discovery, one that can change the world of Rithmatics forever.

You can always count on a fantasy writer to conjure up an entrancing and exciting world, and Mr. Sanderson is most certainly not an exception. He takes us back in time to the American Isles in the mid-nineteenth century, speckled with 'gearpunk' technology with cogs galore. But what really takes center stage in the novel is the world of Rithmatics. The way Mr. Sanderson reveals to the reader what Rithmatics is and how each of the chalk lines that the Rithmatists draw behave is done in a way that is easy to understand and, at the same time, engages the reader into such a unique and enigmatic world, even if they're non-Rithmatists themselves! I especially loved the illustrations of the various defenses and binding points and so on that interspersed each of the chapters--it really brought the concept of Rithmatics to life and enhanced the already amazing world-building going on in the novel. It almost kind of makes me wish that I had Rithmatic powers... even if it means facing down some nasty, flesh-chewing Chalkings.

I'll admit that I was just a little bit unsure about having a relatively younger protagonist than I'm used to in most YA novels, but worry not! Simply put, Joel is a great hero who is clever, brave and likable. The way he deals with issues ranging from his lack of Rithmatic powers to the kidnapping case showcases his quick wit and his obvious devotion to Rithmatics, while at the same time showing a more compassionate side to him. I liked the relationship between him and his mother, who works at the academy as a cleaning lady--it's undeniably warm and leaves you with gushy feelings inside. The other characters were just as equally amazingly developed. Take, for example, Melody. At first, I found her a little annoying, with her constant overreactions and frizzy red hair (just kidding about the last part! I don't have anything against redheads). But as Joel began to see her as a friend, the more I saw her as a more complex character who deals with family pressures and problems with Rithmatics. Another character to note is Professor Fitch, a rather bumbling fellow who knows his stuff but is often diminished by his meek attitude.

The storyline of "The Rithmatist" was compelling throughout, even the parts where there wasn't much action. The main plot of the bloody kidnappings strung tensions high, and my heart literally leapt at places, especially towards the end when all was revealed! The minor subplots of Joel's lack of Rithmatic ability and the growth of his friendship with Melody just tied in so nicely together in a way that didn't overshadow the main plot, but at the same time didn't let the main plot overshadow them. There's just such an understated nuance in the storyline as a whole that few writers can pull off truly successfully, and all I can say without rambling on and on incoherently about it is that it's simply worth it!

All in all, "The Rithmatist" is a fun, thrilling and truly spectacular fantasy novel that is a must-read for all ages. Mr. Sanderson has definitely proved himself a versatile writer, and trust me when I say that I will gladly read anything that he writes. I highly recommend this to all fantasy lovers, or anyone looking for a great book to fully immerse themselves in!