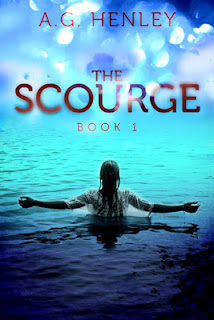 When people find out that a book is self-published, they tend to naturally shy away from it. I guess they think, if a publishing house rejects a manuscript, it's probably not good enough. The truth is that sometimes, the story isn't what they're looking for at the time, or they've already signed a similar story. Whatever the case is, just because a book is self-published, it doesn't mean that it's bad! When I picked up "The Scourge", I didn't even know that it wasn't published by Random House or Penguin or what have you, and it didn't come through at all when I actually read the book either--in fact, it's one you should check out.

Seventeen-year-old Groundling, Fennel, is Sightless, but she knows how to survive in the dangerous forest. When she's called by her people to begin her lifelong task of braving the Scourge--flesh-eating creatures that haunt humans--to collect water for both the Groundlings and the Lofties, Fennel is anything but fearless. But she won't be alone. Fenn's Lofty Keeper, Peree, a boy who smells like summer, protects her from the trees. When the unlikely pair uncovers a secret that shatters the truths they thought they knew, Fenn must decide who and what to protect--her people, her growing love for a boy she thought she'd never fall for, or the elusive dream of lasting peace in the forest.

I don't know whether this sounds strange or whatever, but the fact that the protagonist is blind just made the story all the more interesting. It presented all sorts of challenges, but Fennel deals with them in a way that makes her likable and extremely believable. Rather than presenting her readers with a two-dimensional, archetypal 'strong' heroine with a single weakness she has to overcome, Ms. Henley weaves in layers to Fenn's character that make her anything but boring. There were times, however, when her blindness wasn't entirely believable in some of the descriptions--they were almost too visual, and it would've been interesting to craft images in your head while reading relying solely on smells, sounds and textures. Nonetheless, Fenn is a unique heroine that I enjoyed being with throughout the book, and I definitely see potential for development in sequels!

Another aspect that was helped by Fenn's blindness is the romance between her and Peree. In a lot of YA books, you'll see the protagonist madly falling head over heels for a super hot boy with piercing eyes, and sometimes it makes me wonder whether it's more of a physical attraction than a deep, real love. And that's something that really bothers me, since romance is a huge element to the YA genre. If the relationship between the so-called star-crossed lovers comes across as shallow, it just ruins it. But in "The Scourge", because Fenn can't just fall for Peree because of his looks, but instead ends up being attracted to him because of his actions and his personality, their romance adds another layer of sweetness and believability to the story. I liked the way their relationship developed, though maybe it could've been stretched out a tad longer.

That being said, I think one thing that put me off just a little was the plot development. The ways the twists in the storyline were introduced to the readers were clumsy and way too sudden, and it just didn't seem too realistic to me. If Ms. Henley had dropped a few hints that led up to these surprises, the plot would've run a lot smoother. Towards the middle of the book, it was pretty much twist after turn after twist, and it was just too much and too out-of-the-blue to work really well.

Nevertheless, "The Scourge" is definitely worth reading, especially if you love realistic romances, or a believable, unique character. Peree and Fenn really tugged on my heartstrings, and I look forward to the sequel to see how things unfold.