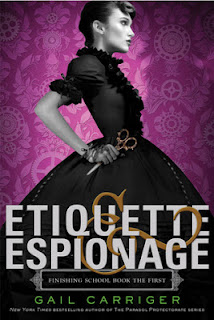 I'm beginning to get a little wary of steampunk novels. While they definitely add a bit of spice and pizazz to the generic fantasy genre, I feel like they're always either a big hit or a big miss. Maybe it boils down to a working balance between effective world-building and over-the-top descriptions, or maybe it doesn't have anything to do with steampunk at all! Whatever the case, I found myself a little disappointed while I was reading Gail Carriger's "Etiquette & Espionage", which bums me out since I'd read a lot of great reviews on it.

When fourteen-year-old Sophronia Temminick is enrolled in Mademoiselle Geraldine's Finishing Academy for Young Ladies of Quality, all she knows is that she'll be forced to endure endless critique on her lacking curtsies and how to sip tea properly. What she doesn't expect is that she, along with other young girls, will be learning how to finish...everything. Certainly, they will learn the fine arts of dance, dress and etiquette, but they'll also learn to deal out death, diversion and espionage. And this, Sophronia suspects, is precisely what she needed in her life all along.

One of the main reasons I couldn't get into "Etiquette & Espionage" was the extremely superfluous writing in the book. I understand that there's meant to be a certain humour and pizazz in the writing style, one that screams 'fun and bubbly in a British accent', but I felt like it was way, way overdone. There's a thin line between a quirky narrative voice and an overly purple narration, and Ms. Carriger's writing in this novel definitely leaned towards the latter. I don't think it would hurt to use simpler sentences and vocabulary sometimes, since it just felt like everything was just too forced and over-the-top. I found myself skimming over the bulk of the book simply because of the wordiness of the narrative. Things that could've been expressed in one word were often strung out into a whole sentence at times, and it's a shame because there's definitely a more fun element to the narration. Sometimes, less is more indeed!

Another obstacle I encountered while reading "Etiquette & Espionage" was the storyline, which unfortunately fell a little flat. There is, without a doubt, great potential with the whole concept of a school for future assassin ladies, especially when coupled with the mysterious steampunk world. However, there was little in the plot that actually grabbed my attention and hooked me in. Instead, it all seemed pretty trivial, like nothing of importance was happening. Sure, there are flywaymen attacking the school on their search for an enigmatic prototype, but I got the impression that the stakes weren't very high to begin with. Everything was resolved so quickly and cleanly and easily, and, to me, it just wasn't very interesting.

Having said this, I do think that Sophronia is a quirky, fun heroine who's a bundle of mischief and excitement. Her quirks and her disobedience in a society where pinkies must be lifted and noses lifted higher really set her apart, and her unquenchable thirst for adventure certainly made her exciting. There's a sort of naivete about her that lends itself well to the story as a whole, which is clearly seen in her interactions with other characters and in the very way she speaks. The down side to Sophronia as a protagonist is that I never really related to her--you don't really get much of her thoughts and inner emotions. Instead, it's more of a slapdash, shallow look at her actions and speech.

Overall, "Etiquette & Espionage" does have some great potential to be a fun, quirky book, but it ultimately failed to be truly engaging and exciting. In fact, I just felt that the book was a little juvenile, without any depth to the characters or to the storyline.