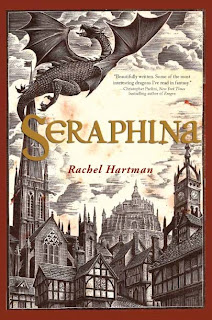 When books take me longer than a week to finish, it's either because they're just really, really long (think "Game of Thrones" long), or they're just not that compelling. When I saw the great reviews of Rachel Hartman's debut novel "Seraphina", I knew I'd end up finding it on my e-bookshelf sooner or later. What I didn't know was that I'd find myself stuck on the same book for nearly ten days, which is just such a bummer when every other reader has enjoyed it thoroughly! But let's just start from page one.

Four decades of peace have done little to ease the mistrust between humans and dragons in the kingdom of Goredd. Taking their human forms, saraantras, the rational, mathematically-minded dragons attend court as ambassadors. As the treaty's anniversary draws near, however, tensions run high. Seraphina Dombegh, an unusually gifted musician, joins the court just as a member of the royal family is murdered in a suspiciously draconian fashion. Together with the bastard Prince Lucian Kiggs, Seraphina investigates a sinister plot to destroy peace, though she still struggles to protect her deepest shame and secret.

It's more than a little sad to admit this, but I found "Seraphina" pretty slow and plodding. There wasn't really any action in it, and mostly consisted of a rather passive Seraphina hiding her scales and meeting new people. Even though the blurb led me to believe that there was some mysterious murder that could threaten the peace between dragons and humans, I feel like Ms. Hartman revealed everything way too early on in the book, so it was just pretty obvious and deadpan when the big answer was revealed. It's a shame because "Seraphina" has so much potential for exciting adventures into these fascinating lands like Samsam, and, I mean, there are dragons!! Unfortunately, I feel like the book ultimately fell flat, and I found myself skimming over a lot of the text in the first three-quarters.

One of the things I did like about "Seraphina" was the diverse cast of characters, most of whom were pretty well developed throughout the novel. First, you have the titular heroine Seraphina, who's a pretty interesting character since the stakes are high for her if her secret (dun dun dun) is revealed. To me, though, she wasn't a particularly memorable or exciting protagonist. She's responsible, mature, yet vulnerable, but there really wasn't anything that made me want to meet her in person or anything of the sort. Despite this, there's some good character development going on throughout the novel with Seraphina as she learns to accept herself for who--and what--she is. The characters I just liked unconditionally were definitely the little band of 'grotesques' in Seraphina's mind. Lars' German/Transylvanian accent made him quirky and cute, while Dame Okra (aka Miss Fusspots) had her own annoyingly endearing qualities. And, of course, Orma! I liked Orma's struggle between his logical dragon side and emotional human side, and I definitely sided with him until the very end. Makes me wish I had an uncle like him!

As for the writing, Ms. Hartman without a doubt writes in a very sophisticated manner. The vocabulary is rich and the sentences are well strung, but I do have to question the diction at times. There are a lot of fancy words that seem somewhat natural in their context but still a little jarring, almost like when you know a bunch of great SAT vocab that you want to use in your school paper. It was also pretty wordy at times, and I feel like the pace would've been a lot quicker and compelling had unnecessary words been cut out entirely.

Overall, "Seraphina" to me is a decent fantasy novel with interesting things going on, but it just doesn't really cut it for me. It never hooked me in, and I had to force myself to finish the book, which is a shame since there are some promising elements, such as the cast of characters. It's just never great when you feel like you're reading a different book from the one extolled by many other reviewers, like you've missed out on something while reading it, but I'd probably give this one a pass.