Book Review: How to Lead a Life of Crime by Kirsten Miller 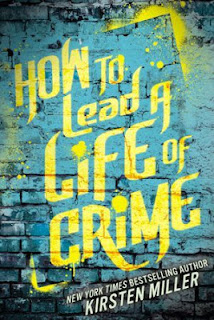 I could never imagine myself living as a criminal. In fact, I don't even think I have what it takes to even be a criminal--the guts, quick thinking, slippery fingers. When I picked up "How to Lead a Life of Crime" by Kirsten Miller, intrigued by the title, I thought, well, here's my chance to live the life of a criminal! A friend told me a quote by George R.R. Martin the other day: "A reader lives a thousand lives before he dies. The man who never reads lives only one." And that's one of my favourite and magical things about reading--you experience things that you normally would never experience. Through "How to Lead a Life of Crime", I got to live as a teen boy with a troubled family history in an institution that teaches its students to be criminals.

Flick is a talented thief, abandoning a privileged life with his father for the harsh streets of Manhattan. He's honed himself to become stronger, to be the protective older brother he failed to be for Jude, and when he's given the opportunity to avenge the death of his brother, Flick knows he'll stop at nothing to do what it takes to bring his father down. The only catch: attend the exclusive Mandel Academy and rise to the top. Only the most ruthless students are allowed to graduate. The rest disappear. The only question is, can Flick put aside the things that matters to him most--the girl he loves, his conscience, his humanity--to survive the academy?

There's something undeniably dark and gritty about this novel. When I first read the synopsis and found out that the book was about an institution for budding juvenile criminals, a "Hogwarts for Hustlers" as Flick describes it, I'd expected that it'd be something similar to the Cherub series by Robert Muchamore or the sort. Instead, what you get is a lot darker and more disturbing than a bunch of kids on military missions. A good place to start is Flick. Since the entire book is told from his point of view, you really get a good look into Flick's character and his history. First, you have the abusive, alcoholic dad who's ruthless, rich and calculating, then you have the mom who's always tried to run away with her two sons, only to have them tracked down by--you know it--the cold father. Not to mention the younger brother who tried to protect Flick and died doing so. Oh, and did I forget that Jude pops up in Flick's mind to talk to him as Peter Pan? Flick's undoubtedly had to deal with a lot, and that's what makes him such a gritty, honest character who has no choice but to become stronger and more ruthless in order to survive. But at the same time, he struggles to retain his humanity and conscience, and that's what makes him such an interesting and complex protagonist to follow throughout the novel. There's an incredible amount of great character development going on with Flick, and Ms. Miller has done an excellent job in crafting a protagonist who's forced to challenge literally everything he knows about himself.

The whole idea of an institution that trains kids to become mastermind criminals is really taken up to a whole other level with the Mandel Academy. The students there are so ruthless, but what makes them especially pitiable is the fact that a lot of them would never have been that cruel had it not been for the academy. Though then again, there are the natural psychopaths who don't give a damn who they have to crush or kill to succeed. For example, the Wolves--the top-tier students in the academy--are so cutthroat that it's graphic, with decapitated heads and forcibly slit wrists and everything. It kind of shocked me when I read such gruesome descriptions, and it was then that I realized that these kids are so, so messed up. Ms. Miller definitely did an awesome job with creating an eerie, dog-eat-dog world within the confines of the Mandel Academy, and sets up the perfect place for all the crazy intense events that happen in the novel.

The plot of "How to Lead a Life of Crime" was exciting and engaging throughout. I wouldn't say that it remained fast-paced in every single page of every single chapter, but I feel like even the slower portions were necessary in building up the tension and in the development of the characters. I especially liked reading about the relationships between the characters, like Flick and his dad or Flick and Joi (she is seriously one amazing character, by the way! Kick-ass and clever to boot) , which unfold throughout the novel. The intense twists and turns also definitely upped the ante of the storyline, and got me flipping through the pages in rapid speed.

Overall, "How to Lead a Life of Crime" is a dark, gritty and intense story with sometimes scarily real characters and a compelling plot. It's an adventure you don't want to miss, even if it isn't set in some far away land with swords and pirates. And that makes it all the more engaging and exciting--the fact that it's a definite possibility in the real world we live in today.