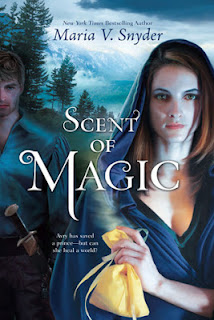 Happy new year! I can't believe 2012 is finally over, and we have 365 days ahead of us in the new year to do whatever we want with them. Being in my last year of high school, I definitely want to really carpe diem it up in my last few remaining months before summer, and the beginning of 2013 is a perfect way to just get that kickstarted. The new year also marks a fresh start, a new beginning. But that doesn't mean that existing problems will magically be erased--a new year is a force that gently pushes you to solve those problems yourself so you can have the best months of your life. Wow that was pretty philosophical. But I digress. Without further ado, I present to you the first review of the year: "Scent of Magic" by Maria V. Snyder, the sequel of "Touch of Power".

Avry of Kazan, the last Healer in the Fifteen Realms, is supposed to be dead. After hearing of her supposed death from the Plague, friends and foe alike believe her to be gone. Luckily for Avry, this works to her advantage. On top of stopping the megalomaniacal King Tohon--who also seems bent on winning her heart--from seizing control of the Realms with his armies of the walking dead, Avry is also determined to find her sister and repair their estrangement. And she has to do all of this alone--Kerrick, her partner and sole confidant, returns to his kingdom to assist Prince Ryne in amassing support against Tohon. War is coming and Avry is alone. Unless she figures out how to do the impossible...again.

One of the things I absolutely love about Ms. Snyder's novels are the romantic relationships she creates (although this is probably not surprising). I remember when I read the "Study" series, which is the first of Ms. Snyder's works, Yelena and Valek's romance really blew me away. Instead of the sappy 'love at first sight, OMG his piercing eyes just melt my heart and oh lord those muscles, I can't stop myself, this is destiny' romances you see in a lot of books, Yelena and Valek's relationship was incredibly natural, mature and real. In the "Healer" series, Avry and Kerrick's romance is exactly that. You can easily tell that what they have between them goes beyond lust and attraction--it's a bond that's created from real love and friendship and mutual respect. They both just go so well together, and, despite the fact that they weren't physically with each other throughout most of the book, you can see that real bond between the two. If anything, Ms. Snyder's utterly believable romantic relationships are one of the many things that really sent me on a crazy fangirl phase. Who doesn't want true love?

Outside of her intimacy with Kerrick, Avry is a heroine who's hard to dislike. I was a little surprised at first by the fact that she's pretty old at 21 years old in comparison to the rest of the protagonists in other books, but despite this Avry is still relatable. She's very down-to-earth and is a realist, and has an incredibly witty sense of humour to boot. She also has flaws and fears that she struggles with, which makes her all the more believable and relatable. It was also interesting how Ms. Snyder decided to alternate chapters that were from Avry's point of view and Kerrick's. I feel like I got to not only learn more about the two characters, but also see more of the Fifteen Realms and the rest of the world.

The other characters in the novel were unique and added a lot to the plot. As always, I loved the group dynamics between Avry, Kerrick, Belen (aka Poppa Bear), Flea, Quain and Loren (the latter two nicknamed 'the monkeys'). Just like Avry and Kerrick's romantic relationship, the relationships within the group are natural and even amusing at times to read about. King Tohon is a pretty interesting character as well--particularly now that Ms. Snyder has woven in his twisted feelings toward Avry and his willingness to win her over the 'proper' way. Though this doesn't change the fact that he's an ass.

The storyline of "Scent of Magic" remained engaging throughout the entire novel, and I flipped through the pages in avid interest to see what would happen next. There were some moments when the jumping around from different events at the end of a chapter, as well as the alternating point of views, confused me for a millisecond or two, but the storyline remained fluid throughout nonetheless. The pace did slow a little during the middle, but it never got wholly boring either. In fact, a lot happens that really interested me--especially the potential of romantic tension between Avry and Tohon. It'll be fun to see how things unfold in the next book.

Overall, "Scent of Magic" is an amazing sequel to an amazing book, with a wonderfully real romance, a great cast of characters and an interesting storyline. I really can't wait until the next book to see how Ms. Snyder develops the existing relationships and events. I highly, highly recommend that you check out all of her books, especially the "Study" series, which I just fell in love with!