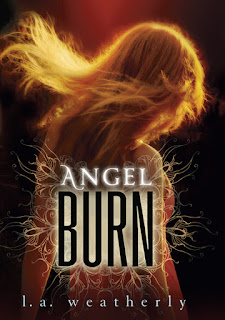 It seems that angels are the new vampires. There was "Halo" by Alexandra Adornetto, the "Fallen" series by Lauren Kate, the "Hush, Hush" series by Becca Fitzpatrick, and "Sweet Evil" by Wendy Higgins, just to name a few. I'm pretty sure there are a buttload more out there in the literary world. The one thing that never disappoints me is the cover. Angel books never fail to have beautiful, breathtaking covers that grab your attention from the get-go. "Angel Burn" by L.A. Weatherly, the first book of the "Angel" trilogy, was certainly no exception. It makes me wish I had golden hair that shone in the sunlight and floated in some gust of ethereal wind. Putting aesthetics aside--they do say "don't judge a book by its cover"!--I loved the new take on angels. But I'll get back to that in just one second.

Alex Kylar is an Angel Killer, or AK for short. He's been trained ever since he was young to track, fight and kill. In a world where angels are not benign celestial creatures but fierce hunters who feed off humans, the AKs are the only thing standing between angels and humans. And then there's Willow. Sixteen-year old Willow Fields has never fit into school. Some things about her just don't make fitting in easy. Her mom is lost in her own world, her dad left before she was born, and her aunt constantly complains about having to provide for the two. On top of all that, she's a psychic, though she doesn't know where such a power comes from. When Alex is sent to assassinate his next target, he has no idea that he's about to discover that nothing is as it seems.

As I was saying before, Ms. Weatherly's spin on angels was fresh and made for an interesting, unique story. The entire idea of having angels as malicious leeches who sucked away human life forces was something I hadn't encountered in a book before, and I liked the Buffy-the-Vampire-Slayer-esque romantic tension between Alex the Angel Killer and Willow the Clairvoyant. The intricacy of the battle between AKs and these heavenly beings also allowed for great background stories behind the two protagonists.

Speaking of which, I found Willow to be a fairly likable character who's a genuinely sweet girl with a slightly tough edge to her. I liked the quirk of her interest in engines and mechanics, though I felt like it was kind of thrown in there to make her seem more special. The more tomboy/eclectic side of Willow could have been developed and exploited a little further so that she became even more likable and realistic. She just seemed a little too perfect to me. The same goes for Alex. He did have a more dynamic character, with a caring, vulnerable side on one hand and the bad-ass assassin on the other, but he just seemed a bit too idealized. Don't get me wrong, I love the concept of a perfect, attractive, truly kind boy, but what about his flaws? That being said, if the 'flaw' was being a jerk who's actually sweet on the inside, I think that would've made him a little too much of a stock character, but it'd be interesting to see what kind of human shortcomings each of these protagonists had.

The relationship between Willow and Alex seemed a tad too 'struck-by-lightning-I-love-his-eyes-and-I'm-being-sucked-into-his-soul' from the very beginning, but it really developed into something sweet and believable. I went "awwww" as I imagined the two together in some scenes! Though I do have to admit that I cringed when Alex called her "baby" at one point.

"Angel Burn" is one of those YA novels that brings you on an easy, enjoyable ride. It's definitely worth checking out when things are too stressful at school or in life in general, and I'll be sure to check out the sequel "Angel Fire", which, thankfully, is already out! Check back sometime for that review.

P.S. I couldn't resist--isn't the cover amazing? Interested to see how it turns out!