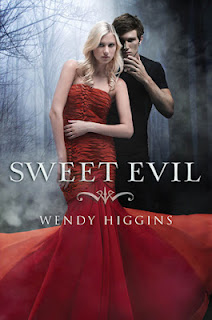 That is one seductive cover. That was my first thought when I picked up this book. The black and red, the rugged guy caressing his jaw, the fanned out dress--everything about the cover oozed dark passion. Unsurprisingly, "Sweet Evil"by Wendy Higgins is about sin in all its forms: greed, pride, envy and, of course, lust.

Sixteen-year old Anna Whitt is your typical good girl. She doesn't drink, doesn't do drugs, doesn't swear--the whole package. The one thing that sets her apart from everyone else is that she was born with a sixth sense to see and feel other people's emotions. And, despite her goody two-shoes nature, she knows there's an inexplicable pull towards danger within her. Everything changes when she meets danger incarnate in the form of Kaiden Rowe, who reveals to Anna her true heritage.

I really liked the new take on the angel/Nephilim story in "Sweet Evil". The deadly sins are physically embodied by demons, who live disguised among humans, and their entire society as crafted by Ms. Higgins is ruthless, cruel and intriguing. The plot was engaging and fairly up-there, though I wish there had been more of a climax or a moment where my heart  revved up to 100 miles per hour. Overall, though, it was fun to read.

The characters were all rendered believably and were likable, which is key especially in YA novels. I didn't find Anna annoying at all, which is a possible danger at times for 'goodie goodie' characters who come to face danger and evil. Everything about her was realistic, and following her as she was pulled into the dark world of demons was fun and interesting. I also almost, almost fell for the tormented, sizzling Kai. The one thing that prevented me from gushing over him was the fact that there wasn't enough believable interaction between Anna and Kai, especially in the beginning. Why did Kai fall for Anna so quickly? Don't get me wrong, there was some definite tension between the two, but I wanted more!

Every character in "Sweet Evil" had their own quirks and their own story, which drew me in and made me invested in each of them. I particularly liked Marna, because she's actually sweet and friendly, despite her horrible past and the work that she has to do as a daughter of the Duke of Adultery. The dynamics between the Kai's group of Nephs--Kopano, Blake, Ginger and Marna--was realistic and enhanced the relationships and events that unfolded.

"Sweet Evil" is an alluring beginning to what promises to be a fun trilogy. I can't wait until the second book, which seems to be tentatively titled "Sweet Peril". Check out the book description here (spoiler alert!).