Book Review: Into the Still Blue by Veronica Rossi 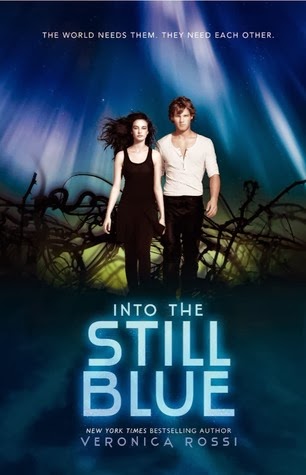 I've put off writing this review for a while, and I just can't place my finger on why. After crossing off busyness (I lolled about watching TV when I had free time this week), sickness (a little runny nose never hindered writing), and laziness (I really did want to write about something, anything), I've come to the conclusion that I didn't really feel like there was much to say about this book. "Into the Still Blue" is the finale to Veronica Rossi's "Under the Never Sky" trilogy, bringing Aria and Perry's journey to an end. But was it as fresh and exciting as its two predecessors? I can't say I know for sure.

The race to the Still Blue has come to an uneasy stalemate. Sable and Hess have taken Cinder, the only person who can control the deadly Aether storms, but to no avail. The Dwellers and Outsiders, who are united only in their fear of their desperate situation, are confined within a cave they are using as their makeshift refuge. With Roar blinded by grief and loss, Perry and Aria know that it's up to them to do something. Out of options, they assemble an unlikely team for an impossible rescue mission, one that will test their loyalties, courage and love. With time running out, can Perry and Aria help those they love--and keep their love for each other intact?

Let me start off with the characters. The entire novel alternates between Aria and Perry's points of view, which I think was a good decision since it gives us a more holistic perspective of what's going on in the story and allows us to make connections as readers. Not to mention it provides ample excitement with lots of potential for dramatic irony! To me, both Aria and Perry are fairly interesting and engaging protagonists to follow throughout the entire trilogy. They come from two very different backgrounds, have different personalities and face different responsibilities. They're both mature at this point in the story, and I really liked the way they worked together as a couple in the face of such enormous responsibilities to lead the Dwellers and Outsiders to a safe haven. But what kept me from becoming really invested in these two characters was that they didn't entirely stand out to me. They kind of lost the "spark" that made them unique individuals in the first two books, though I guess given the great deal of character development in the previous books, it's understandable. This is not to say that they were flat, boring characters--they just weren't as exciting as they were before.

One of the characters I did find exciting, though, was, as always, Roar. What happened in the last book in the trilogy obviously has a huge impact on Roar, and the way he struggled with these feelings of loss and grief was really believable and saddening to read about. Yet what makes Roar, well, Roar, is his ability to still be himself, even if he's lost in anger and thoughts of revenge. Take, for example, his interactions with Sable's son (I can't for the life of me remember what his name is--sorry!). There's some humorous banter going on between the two, which reminds us of Roar's wit and dry humour. And that's what I love about Roar--he's such a three-dimensional character, with layers and layers of thought and emotion to him. I'm sure if you were to read this trilogy, you'd fall for him, too.

What I think ultimately let me down when I was reading "Into the Still Blue" was the plot. I just don't think it's all that memorable. Admittedly, Ms. Rossi does a great job with tying up loose ends and giving us a satisfying ending, but the storyline itself wasn't as compelling as it could've been. Sure, quite a few things happen, but they just didn't excite me as much as they could have. The climax, for example, wasn't as great of a climax as it could've been. From my recollection of the story, it was a lot of running around and shooting people. Don't get me wrong, the story was most definitely not boring nor did it induce yawns out of me--it just wasn't as scintillating, and didn't get me hooked.

Overall, "Into the Still Blue" is a fairly good ending to the "Under the Never Sky" trilogy, though I wouldn't say that it was the most memorable way to end it. I would still give it a read, especially if you've read the first two books, since you may find it more exciting!