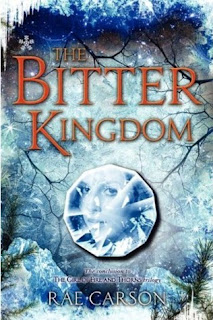 Reaching the final page of the last book in a series always brings out mixed feelings in me. On one hand, you feel like you've just reached the destination of a long journey, but on the other, you can't help but feel like it's a final goodbye to friends you've grown to love (or hate!). "The Bitter Kingdom", the finale to Rae Carson's "The Girl of Fire and Thorns" trilogy, stirred up those bittersweet emotions inside--along with a few other ones, like excitement, joy and, of course, the emotion of holy-moly-what-is-going-on.

Now a fugitive in her own kingdom, Elisa is determined to save Joya d'Arena--and the man she found herself falling in love with. Ever since she discovered the zafira, the ancient power source of all magic, her Godstone has been stronger than ever, along with her own resolve to regain her rightful place as queen. But with tensions between the humans and the Invierno rising higher than ever, Elisa knows that her task won't be a piece of honey coconut cake. With the help of her friends, Elisa will face hardships she's never imagined--and make discoveries about herself and her world that could change the course of history forever.

I remember loving Elisa in the first two books, and that certainly hasn't changed in "The Bitter Kingdom". I'll even go so far as to say that Elisa is undeniably one of the strongest, most admirable heroines I've met so far on my YA travails. She's determined, compassionate and confident all at once, but what makes her such a great protagonist is that she's had to develop these traits as she faces the daunting task of being a queen. The development of her character never ceases; instead, it's fluid and dynamic, even until the very last page of the entire trilogy. What makes her all the more likable is that she's super grounded. Ms. Carson doesn't present us with a near-perfect character who's blessed with a pretty face, great personality and brains in a nice, neat package. Nope, instead you get a girl who's a little on the chubby side and struggles with her confidence. Seeing Elisa grow into the wise and strong queen we see at the end of the book is exhilarating and refreshing all at once. Now that's a kick-ass heroine!

The other characters in "The Bitter Kingdom" were just as fun to read about. I really liked how Ms. Carson gave her readers a few chapters here and there from Hector's point of view--it's always juicy to see what the love interest has to say! Hector and Elisa's romance is so sweet and so real, and never over-the-top-mushy-gushy and all that. The way they interact with one another, both romantically as lovers and professionally as queen and lord commander, works in a way that they become such a great match together. Other than Hector, of course, you have Mara, Belen and Storm, who accompany Elisa on her journey. I love the little romance between Mara and Belen ("Will you marry me now?" "No."), and Storm has always been such a witty, fun character to read about! Also, we're introduced to Mula, a little girl who they pick up along the way, and she's just a bundle of energy who, surprisingly, opens everyone's eyes to truths that only children seem to be able to see.

Having said all of that, though, I have to admit that I was a little disappointed with the storyline. First, there was the fact that I spent the first couple of chapters having no clue as to what was happening. Sure, it's exciting to start stories en media res, but I feel like had Ms. Carson woven in some backstory into the plot, it would've saved me a lot of trouble trying to remember what had happened in the last book! Second, I found that the plot itself was a little bit on the slow side. There was a lot of traveling and camping going on, especially in the first half of the book, and I felt like all these descriptions of corn cakes and sleeping bags were a little unnecessary. This isn't to say that the storyline wasn't exciting, oh no! There definitely was a lot happening, with revelations and fights and all that, but I just wish the pace had been a little faster to keep tensions up and running.

Overall, "The Bitter Kingdom" is a great finale to "The Girl of Fire and Thorns" trilogy, with a truly dynamic, well-developed heroine, a cast of engaging characters and an exciting (if a little slow) plot. I can't believe it's time to say goodbye to Elisa and her friends, but I can do so knowing that I've just been on one heck of an adventure!