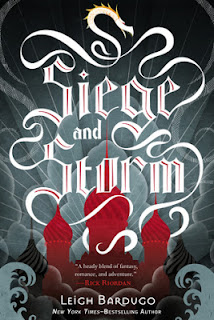 When I finished "Siege and Storm", the second book in the darkly magical "Grisha Trilogy" and the sequel to "Shadow and Bone", I flipped through the last few pages a couple times and went, "That's it?" I was pretty surprised by how quickly and smoothly the whole novel progressed, and I'm excited to see how it all ends in the trilogy's finale! I actually read this book a little more than a week ago, so apologies if my memory's not as fresh as cream this time around!

All Alina and Mal long for is a fresh start. But being hunted across the True Sea and being the renowned Sun Summoner poses more than a few obstacles. Alina knows she can't outrun her past, or her destiny, for long. The Darkling has emerged from the Shadow Fold stronger and more dangerous than before, and is bent on having Alina and her great power for himself. With the help of a notorious privateer, who harbours a few secrets of his own, Alina returns to the country she abandoned to stop the darkness from spreading. But as her power grows, Alina finds herself slipping deeper into the Darkling's game of forbidden magic, and farther away from Mal. Alina will have to choose between her country, her power, and the love she always thought would guide her--or risk losing everything to the oncoming storm.

As with many fantasy novels with more complex characters, "Siege and Storm" delves even deeper into Alina's thoughts and emotions as she deals with the responsibilities and burdens that come with being the Sun Summoner. Her love for Mal and her slow surrender to the temptations of power clearly show this, though I do have to admit that at times it did get a bit too repetitive. Or maybe I feel that way because Alina, while understandable, became a little less likable as the book progressed. And maybe that's what Ms. Bardugo wanted! Despite the fact that the heroine does begin to turn away from her 'true self', you still empathize with her after seeing the way the Darkling exploits her growing desire for power. I did like Alina's honesty with herself, like when she realizes she wants to kiss Nikolai, she recognizes that it's probably because of her hurt toward the growing distance between Mal and herself. Honesty's a good way to prevent a character caught in a love triangle from getting annoying.

Speaking of love triangles, I loved the newly introduced character of Nikolai! It's about time there was a real contender for Alina's feelings (the Darkling doesn't count since he's just evil and manipulative). Nikolai, the Prince of Ravka, is such a dynamic, exciting character who's charming and sly and serious all at the same time. Okay, maybe not all at the same time. I feel like Nikolai's something of a chameleon, adapting his actions and words to the situation at hand. But in terms of how suitable he is for Alina, maybe not. Alina needs someone to keep her grounded, and Mal is definitely the boy to do that. Mal's undeniably sweet and courageous, someone who's wholly dependable. But I'm not complaining about a love triangle! It certainly adds some extra tension to the romance in the novel, and who doesn't like a little romance?

Overall, "Siege and Storm" is a mesmerizing sequel with a multi-dimensional cast of characters and a darkly thril
Posted by Yoon-Ji at 11:11 PM