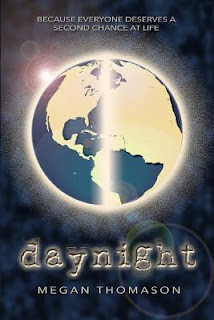 I'm just going to come right out and say it. This book isn't one of my favourites. And it just sucks to not be able to get into a book that's received so many great reviews; it's like I'm missing out on something that every other reader was privy to! I picked up Megan Thomason's debut novel "Daynight", intrigued by the whole idea of a second chance at life and the supposed great cast of characters... But I'm getting ahead of myself. To the beginning we go!

When Kira Donovan, an average seventeen-year-old in her junior year, signs the Second Chance Institute (SCI) Recruit contract to escape memories of a bombing that left her boyfriend and friends dead, she has no idea what she's in for. Her Recruit partner is the snarky, brooding Blake Sundry, who's determined to infiltrate and destroy the organization that sent his family to Exile...as well as the boy the SCI wants to Cleave Kira to. But Kira's mind is ensnared by memories of Ethan, a gorgeous, mysterious boy she met at the fateful party, not to mention the son of one of the Ten--the presiding powers of the SCI. With the totalitarian government watching their every move, can Kira, Blake, and Ethan survive the brutalities and threats thrown at them?

The one thing that really drew me to "Daynight" in the first place was its intriguing, unique plot. I mean, an institute that resurrects people to give them a second chance at life on an alternate planet? Count me in. I'd never encountered such an exciting concept in the YA dystopian world before, and needless to say, I was reeled in even before the book began. There's also some great world building going on in "Daynight", where everything is the opposite of Earth. The novel mostly takes place in Thera, a carefully monitored world accessible from Earth via a series of portals--if you enter by land on Earth, you arrive at sea on Thera, and vice versa. The sunlight on Thera is too harsh for human skin, so the inhabitants of the world live by a nocturnal schedule. And, of course, the rigid lifestyle imposed upon the people on Thera by the SCI only serve to complete the whole dystopian element of the novel.

But then comes the bad. What really turned me off of "Daynight" was the characters. The entire novel alternates between the points of view of Kira, Blake, and Ethan. While there was some distinction between the voices of each of the protagonists, they all pretty much said the same thing: "Wow he/she is so hot, oh gads almighty I'm so attracted to him/her." Seriously. Sure, I get that a YA novel unavoidably has some steamy romance between the characters, but literally all the characters would talk about was how much they wanted to maul one another. It's like they were teenagers amped up on ten times the amount of hormones. Gosh.

Another thing about the characters was that their reactions to all the things happening to them in such a messed up world were so tempered. Take, for example, Kira. The SCI shoots some people really, really close to her (won't say who to avoid spoilers), and she accepts it as cool as a cucumber. What?! If I saw people I didn't even like get shot in the head, I would be on the floor bawling my eyes out. And then when Blake and Ethan discover something about their respective bloodlines and families, they pass it by with a "whoah, what?" and then joking around about it with Kira. I mean, are you serious? So many things that would floor normal teenagers are accepted and handled with such calm that it's like they're not even human. And that's what really put me off the novel and prevented me from becoming truly engaged and invested in the characters: their sheer unbelievability.

Overall, "Daynight" is probably a big miss for me. There's some incredible potential with the unique concept of a shot at a second life on a totalitarian alternate world, but the characters need a lot of work before the novel can be truly engaging.